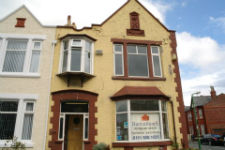 Are you requiring a Funeral Directors In Litherland  that will alleviate the worry and stress that can come about when you have to organise a funeral for a loved one? are you constrained by a budget; so want something fitting and affordable? if these are questions you need answering, its time you turned to family run, funeral directors of distinction in Barringtons Independent Funeral Directors; based in North Liverpool, Waterloo.

from Litherland in Sefton Borough for a funeral directors to throughout Liverpool and into Merseyside, Barringtons have established an enviable reputation for delivering a first class service with the accent on compassion, care, efficiency and above all total professionalism in everything they undertake. A member of the National Association of Funeral Directors, Barringtons have been recognised as the leading funeral directors in the area.

A serious consideration when looking for a funeral directors in Litherland, is cost. Recent reports-Sun Life Direct report– has seen funeral costs go up a whopping 80% since 2004; meaning the average cost of a funeral s now £3,456! A truly worrying thought for many who want a fitting tribute to a family member, but are struggling to meet the cost. Thankfully, at Barringtons Funeral Directors, they are 20% cheaper than the national average-£2850- which gives reassurance and peace of mind to those looking to arrange a funeral service.