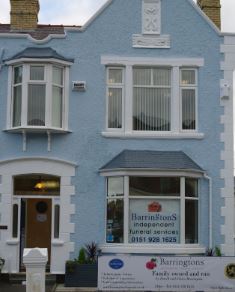 At Barringtons Funeral Services, Non Religious Funeral Services Liverpool are catered for. No matter what your domination or beliefs, at Barrington Independent Funeral Directors, you will find welcoming advice from a team of dedicated professionals whose deep understanding of their clients’ requests has seen them continue to maintain their position as one of the leading funeral directors in the city.

As a Humanist, many look for non religious funeral services Liverpool which leads them inevitably to Barringtons. Focusing sincerely and affectionately on the person who has passed away through a ceremony that incorporates the feelings and memories of family, friends and acquaintances. With greater involvement from friends and family, a non religious funeral will celebrate those who have not lived by religious principles.

At Barringtons Funeral Directors, many non religious funeral services Liverpool are overseen and respectfully adhered to. Being flexible is an attribute that Barringtons have in abundance; able to satisfy and comfort through agreed planning. A member of the National Association of Funeral Directors, they have been established for over 50 years-as a family business-which means you can be confident they will guide and advise on this most momentous day.