Arranging a Funeral Service in Southport

Arranging a Funeral Service in Southport 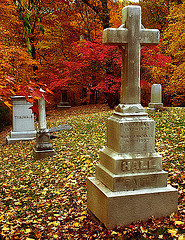 My mum has recently taken to worrying about the future costs of her funeral service in Southport, which is the town that she has retired to. Whatever I say she is concerned that my brother and I will be left with a huge bill that we won’t be able to afford, despite my insistence that we’ll bury her in a cardboard box if she wants! Then a colleague suggested that we look into arranging the service in advance, then we can spread the cost and she won’t have to worry. I thought this was a great idea, and set out in search of a company to help.

I searched the Southport funeral service adverts online, and checked a few reviews before coming up with a short list to visit with my mum. She was not entirely convinced by the idea, but came around when I explained she could pick her own flowers and headstone in advance; apparently my taste is not quite up to scratch. After visiting a few options we settled on Barrington’s, mum said she liked the atmosphere and they had a range of green coffins made of bamboo or similar plants which appealed to our environmental sides. The staff were really helpful, explaining the process and providing a whole range of options to choose from including flowers, music and whether we will have an open viewing or not; I’m not keen on that idea but it’s all up to mum.

We have made all the arrangements for my mum’s funeral service in Southport, except for the flowers; she is still choosing between roses and sunflowers, and of course the date; which will hopefully be in the very distant future. This has been a lovely if slightly melancholy way to set my mother’s mind at rest about the cost of her funeral; the staff at Barrington’s were very patient and helpful, arranging a funeral around my mum’s choices rather than trying to fit her to a set package, or sell things she didn’t want. So if you have an older relative who is worrying about their funeral, relieve the pressure and take them along to Barrington’s to plan in advance.